An apple a day

It was brought to my attention on Twitter. A friend tweeted to me that super model Cindy Crawford has stolen my idea and provided a link. I rushed to click and low and behold Cindy Crawford was posing in lingerie with apples. I was tickled pink to say the least. I know I’m not the first person to ever come up with the apple metaphor in sexy girlie pictures but its been my running theme for several years now. In fact my latest apple photos i shot just a couple weeks ago. I do them off and on and mix it up with my regular escort pictures. Its fun, its sexy,  it invokes the temptation concept and i often tell people to “take a bite of my juicy red apple” so when i saw these pictures i instantly knew someone on Cindy’s creative team had seen my pictures when they worked up their shoot.

I’m an art director, I’ve worked on national ad campaigns.  I’m a photographer, I’ve shot many dirty girls including myself. I’ve also done my fair share of naughty modeling. I know how this stuff works. I’m sure my apple photos are sitting on a white inspiration board in an art directors office or photographer’s studio somewhere. I’m pretty certain Cindy Crawford is clueless that the inspiration for her latest and rather hot shoot is a Escort/photographer who blogs and takes self portraits but i really wanna tell her. I really wanna call her publicist and ask for a quote, i really, really wanna. I cant help it its the mischief maker in me. 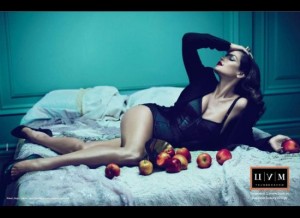 Am i flattered? Yes i am but I’m also not surprised. I’m a conceptual thinker, i come up with good ideas, good concept. I used to make a 6 figure salary on my ability to do that. I also know i don’t own “sexy lingerie apple concept” though it is my branding in the escort world and when other escorts pose with apples it just makes them look lazy and unoriginal. When the world biggest supermodel does it ? Well, it just solidifies what i already knew…. I know what I’m doing!

1 thought on “Cindy and me”