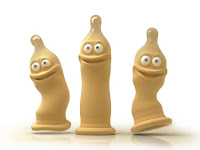 I had a conversation with a male friend about his latest relationship going south. In the course of this conversation he mentioned how they had a pregnancy scare. So i asked “did the condom break or something” i then found out that birth control wasn’t something he generally used. I was taken back a bit. I thought in this day and age everyone wrapped it up.

Skip ahead to a conversation with one of my best civvie girlfriends, she’s been traumatic relationship free for about 5/6 months now and has been casually hooking up with many hot boys (a necessary part of getting over the old guy) she then tells me a rather torrid tale of her screwing some hot guy on her front porch after being out watching a band….. SANS CONDOM. I was pretty fucking pissed off at her. I reminded her that if she were to get “The Herps” all that casual fucking would come to a screeching halt, not to mention the likelihood of catching something more serious. She was generally sheepish about it but her rational … its not easy to have condoms on you, or how expensive they are. excuses, excuses, excuses.

The other day i saw a client who tried to convince me to fuck him bareback. I refused, he was rather persistent, i still refused. It totally ruined the session, I couldn’t get into it, i kept checking to make sure he didn’t slip off the condom and try to trick me. I mean like every fucking 2 mins i was checking, I wont ever, ever, ever, be seeing him again. I told my best escort pal all about him, she was as pissed as i was about his bullshit and sympathised with my situation. We’ve all come across some nasty pig in a work situation who thinks they are so special that we will forgo our well thought out rules and screw them bare. As fucking if.

Are escorts the only sexually responsible people out there? I am very careful and sexually responsible not only for my own health but because i want to protect the health of the man in my life. But even before i was involved with him i would never think of NOT wrapping that shit up. Maybe its because i fuck for a living that I’m responsible about it, because ive been confronted with what i do and I’ve examined the risks. I’ve thought about them, I’ve thought about ways to to minimize them. I don’t personally know any escorts that don’t take precautions about their health, that don’t get tested on a regular basis, that don’t bitch and moan about how much they HAVE to spend on condoms, std testing, etc. It seems that my real world non sex worker friends are pretty damn casual about their sexual health, they are sleeping around (a lot!) and taking amazing risks.

Hey I’m all for sleeping around, I’m just for doing it responsibly. I mean how hard is it in this day and age to have a rubber on you and to fucking use it, i mean good god you don’t know where that dick has been!

9 thoughts on “Put A Rubber On Your Willy”