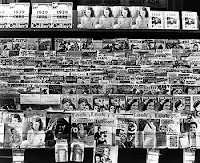 Last week i received my first media inquiry from a major magazine. They Had seen my blog and wanted me to contribute my thoughts for an article they are writing about “call girls” for an upcoming issue. After talking to my point of contact and being made to feel comfortable that this wasn’t a derogatory slant on escorts, i decided that i would love to participate and agreed.

I had forgotten what it was like to work under a deadline. In my old life in advertising i lived under deadline, this took me back to that hustle and bustle even for just one evening of burning the midnight oil. I had to have my thoughts in writing, waiting in my contacts email box first thing in the morning NY time today. Last night i feverishly worked writing paragraph after paragraph and doing my best to be honest, speak my truth and pepper it with my signature Jenny flair. Even though i was dog ass tired i had fun and i think i gave them some really good stuff to use.

The issue is slated for a May release which means it’s out mid April. I have yet to learn if it will be on their online version of the magazine or just the print. I hope its both we will see. I’m excited to see it and i know its going to be a killer story.

I cant say who its for yet because obviously i don’t wanna jump the gun for the magazine but its big and i couldn’t be more happy working with them. I feel like a toddler who took their first baby step… one foot in front of the other… soon i will be walking out the door.