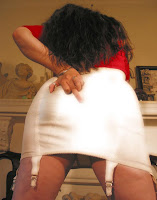 I have been outed. As you may have guessed Jenny DeMilo is not my real name. My personal information and un-blurry pictures were circulating among the Hobby crowd in LA. Links to an old social networking site of mine (pre escort days) was posted on a local review board. My identity on display for the world. Lucky me right.

This is my secret life, having my dazzling smile and my real contact information available to the masses does not make me a happy camper. As you may know I’m a little outspoken so I’d really like to keep my real life, the real me, separate from Miss Jenny DeMilo.

so i begin to try to make sense of this situation. First the local board was kind enough to remove the information. Okay step one done. Now how do i trace back to who would do such a dastardly thing and “out” me.

Step two: who had the information to pass out?

3 people had my information. 2 friends and one escort/porn actor who needed a release for photos i had shot of her. (damn legal documents they always want your real name)

She’s been kinda a pain in my ass for a while, getting upset when i photograph or associate with models she doesn’t like or feels threatened by (and her list was growing seems she has issues with most people who own vaginas). I had spent the better part of last year distancing myself from her because i didn’t care for her bad attitude and her message board antics where she would attack other women at the drop of a hat. She always had something nasty to say about another girl. Usually a skinny, pretty girl but she didn’t limit her female hating to just the girls better looking then her, she was becoming a very equal opportunity hater. I didn’t need to be associated with that kind of bad energy. So i backed off having any kind of dealings with her.

so i went to some of the people who had been passed my information and appealed to their better sense of self to tell me who had betrayed me and been giving out my personal info. I was persistent in asking them to do the right thing. It took some time but low and behold they cracked and gave it up! It was as i had suspected the escort/porn actor who had my info on the legal release had been the culprit. It was pretty logical to come to that conclusion but now in addition to logic someone had given her up. It’s not brain surgery, its pretty simple.. do the math. 3 people have the info. 2 are my friends, 1 is some crazy psycho who has a bone to pick with me and has blocked me from asking her anything about it. ummmmmmmm….

so now what…. whats the epilogue to the story? There’s nothing that can be done about it. My info is out there. I was told by some people in the escort life much longer then i, that if i have gone this long without being outed than I’ve done better then most. So there’s that. There’s also the fact that i was raised a Buddhist and that because of that i do have a very strong belief in karma and what goes around will definitely come around. That people who are such incredible and flagrant assholes will have all the bad energy come back to them. I can only imagine who else this psycho has tried to hurt. If she would go to such lengths to try to hurt me because of something so trivial as me not refusing shoots for people she didn’t like, then i can only imagine what she would do to someone who really get under her skin. She must have many perceived enemies and spend so much of her time wallowing in her negative energy. It’s really kind of pathetic.

I guess the world has a lot of fucked up people in it.