New adult services pop up all the time. Most are fly by night. They think, look at all the free sex worker money! Then they find out how much work is involved and fold. Sex workers actually work their asses off (some literally) to make a living. They can fade away pretty fast. Escort directories linger on the web with no paid ads because they cant bring in the customers, clip sites do little or no business and barely stay a float then shut down. Some take the time to get sex worker allies on their side so that they can show they are legitimate and not there just to make money off them but want to be a member of the community and support them with their new business (see https://www.slixa.com and the now defunct clippette) But they too have trouble navigating the difficult waters of how to make money in an often flooded adult market. As much as people think its free money its not its hard work, very hard work.

It was brought to my attention by a sex worker pal Pinky Galore. “Hey do you know who Call Siren is? They are re-tweeting all my tweets from NiteFlirt” I had never heard of them before. They had a web page up but it was a squeeze page. (hello 2004 called they want their marketing back) the site had no information  about who they were, how the money would work,what personal info they would need, what the split was, what they were offering other then some kinda phone sex and sex chat phone app that would launch “soon” but they sure wanted your email address. Whois says they have been in existence for only a month. 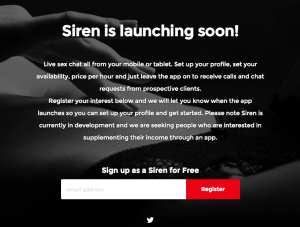 The first thought is why would anyone RT auto tweets from NiteFlirt? My colleague asked them via twitter if they were affiliated with Niteflirt?

What ensued next was nothing short of both hilarious and infuriating. Call Siren spent a good amount of time trying to convince sex workers on twitter that they didn’t need to give them info that said sex workers should just sign up with them no questions asked. Just sign up bitchez and find out later you dumb whores! Okay i’m paraphrasing but thats how it was taken by many including me. 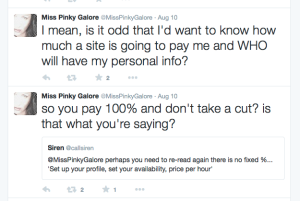 That didn’t go over very well as sex workers (especially the vocal ones on twitter) don’t really like it when they are patronized and treated like they are dumb whores.  They even “LOL’d” at me in response to a serious question. They might as well called me sweetie cuz theres nothing more professional then calling a prospective customer “sweetie” or LOLing at them in response to questions. 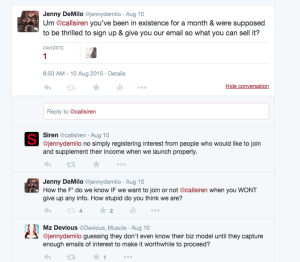 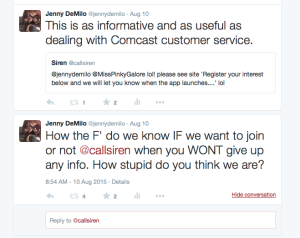 This went on for a while, until yours truly got frustrated with them and did a little digging. Their trademark that they have a ™ on their twitter profile is not registered with TESS. I pointed that out to them and they not so veiled threated to sue me for slander. Clearly geniuses who don’t know the difference between slander and libel and what cause is in a legal case. Lucky for them i do, so i pointed it out to them. 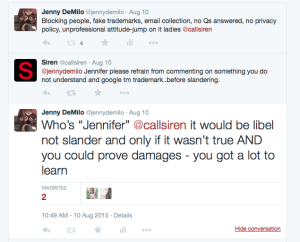 It spiraled down hill from there. With Call Siren tweeting that the sex workers questioning them and at this point laughing at their ineptitude, poor business practices and stated that all the bad press they were getting somehow was good PR for them. Yes, they trotted out that old dog. 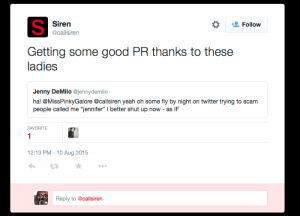 Plenty f people had seen all this and it was re-tweeted far and wide. They did plenty of damage to themselves because they just couldn’t stop. They couldn’t stop responding and every time they made themselves look worse and more unprofessional. They refused to answer any questions  which made them look shady. Its all out there. I thought it was done they slinked away hopefully to re-think their approach. Until this morning when 4:30 AM San Francisco time, where they say they are located.. Hello crack-heads! I get this… 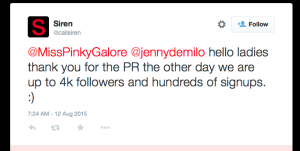 Their twitter count had jumped from only 25 on the first day of the exchange, to over 4K. Thats 3 days and an amazing return wow who knew my bad PR reach was so long! Oh wait… they bought followers in an attempt to somehow smite the people questioning them. Thats just plain old sad. When you look at their followers list you see dead accounts, bible thumpers, bots. its a plethora of bought followers! The most concise and to the point response to them was one by Fiona Foremost. 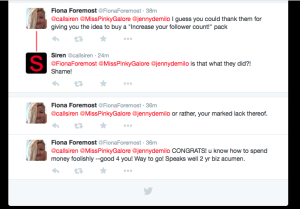 And thats really the bottom line.  All the shenanigans aside, when you are dealing with a sex worker support service you need them to be above board, professional and legit. They will be handling your money, they will have your personal information such as an ID and social security number, they will be able to connect your real identity to your working one. They need to be not just trustworthy but super trust worthy. If they are easily baited into petty arguments, watch out! If they are not upfront in their business practices watch out,  if they wont tell you anything about WHO is running the site really watch out. Sex workers need to be very careful about who they trust with sensitive information. Many live double lives, many can reap heavy repercussions in their lives if ex husbands, clergy, parents, neighborhood busy bodies, the sheriff in Polk county FL find out they are sex workers.

The people that stay in business do support sex workers but are not all perfect. Most if not all protect your information are professional and trustworthy thats WHY they sick around to make money. Call Siren is not one of those business. Call Siren is not trustworthy. I’m going to guess they either never launch and will sell their email list to try to make some money back or when they do they flop. Or they just screw over people royally. Mark …My … Words.