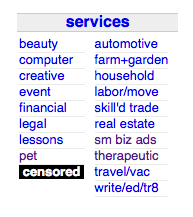 pressured to do something they didn't want to, why does that sound familiar

Craigslist adult services as of last night at 9pm PST is offline. The link is replaced with a black bar with the word censored. Adult gigs where people posted looking for content models is also gone.  It was only a matter of time. Craigslist has been under attack by headline seekers for a while and have been be targeted and painted as as the promoters of of child prostitution for a couple of years now. It heated up a year ago and Craigslist blinked and gave the inch the moralist and misguided do-gooders were looking for and they were on the case to get their mile. Craigslist started charging for advertising, required credit cards and collected information on its advertisers with the intent of passing it along to law enforcement in an effort to comply with the squeaky wheel. Recently 17 Attorneys General fulled by upcoming elections again took up the torch to vilify a website and blame them for the woes of underage prostitution and human trafficking.  Craigslist even though they had federal law on their side appears to have caved.

I say appears because there has been no statement from Craigslist as of yet. There are reports that for two days advertisers were getting their ads denied of renewal. Still other reports are of cards being charged up until the section disappeared.  That doesn’t come to a surprise as there has been very little “customer service” for the millions of dollars Craigslist has made off the backs of hard working sex workers.

Craigslist was never pro prostitution, they worked with law enforcement on a regular basis. They never came out in support of sex workers rights, they often treated sex workers with disdain and regarded them as a “necessary evil” often citing that they needed the Adult Services section to keep them off other parts of the site, they essentially ghettoised  in an intellectual way the sex workers they made so much money off of. I always resented them for this attitude.  Their position was one of who is responsible for the content of an ad. The publishing vehicle or the advertiser. According to federal law its the advertiser no ifs ands or buts about it. Craigslist had a stringent TOU, they manually checked ads to make sure people complied with it, but that wasn’t enough for some. They blamed Craigslist for prostitution and often acted as if they could only get Craiglist adult services offline that prostitution would come to an end.

Well its off line so those individuals can rejoice that now we have the end of prostitution. Huzzah! Unless you look at any number of the the other websites where sex workers take out ads. Like Backpage which is rumored to be owned by the Village Voice, which in turn is owned by Murdock. Yeah that Murdock, of FOX news.

Wanna bet this crusade doesn’t switch focus to the right wing mogul. He’s Australian and their views of prostitution differ from the uptight US but more then that, hes a money hungry, soul crushing, megalomaniac bazillionaire and escort money is jut as green as everyone else’s and hes about to get a multi million dollar bump to his pocket book when the business that was done on Craigslist migrates to Backpage.

This will be interesting to watch play out… I’ve got my popcorn. 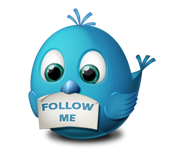