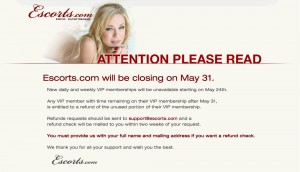 It was a favorite among touring girls and locals in smaller cities alike and a few months back when Escorts.com announced they were shutting down everyone speculated why. The parent company National A1 Advertising out of Pennsylvania (who also owns hot-movies) was recently raided and in the news. So rumors were rampant. the facts are no one knew why they were raided and which companies were involved and no one knew why the subsequent announced shut down of Escorts.com. That Is until now.

It seems the good folks over at Escorts.com couldn’t keep their noses clean and used the operation for money laundering.

Well there you have it, why they shut down. The company as a result have surrendered the domain name and many escorts and their clients lost a great resource. Escorts.com was well liked because they offered advertising and modest reviews but no message boards. The review system allowed for those being reviewed to write a response if they so chose. It was a nice balance of power, that so many escort review sites do not have. It gave escorts a bit of a voice and a little control over their own business.

Its also another example of how escort support services can’t see to keep their noses clean. Prostitution is illegal and thus even above board business often cant seem to operate on the straight and narrow. From photographers who want blow jobs in exchange for photoshoots, to web designers that over charge and then dont deliver,  to advertising venues that get busted for money laundering, it’s frustrating for those of us who are trying to run a business and dont want to have to deal with events or situations that are shady because people think they can get away with it because of who we are and what we do is illegal. The only solution is decriminalization… now