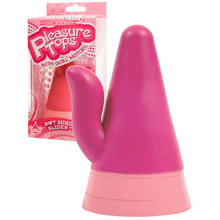 I often feel like Steve Martian in the jerk when my new naughty toys arrive from the good folks at Eden Fantasys “The new phone books are here, the new phone books are here…. err sex toys are here” and this month was no different. When i opened the box i was greeted with an odd cone like vibration toy called “ The pleasure top” its pink! and what girl doesn’t want her futuristic cone like sex toy in pink, i know i do. So this strange little sex toy has two vibration points in the base (mild to weak) and on the clit stimulator (mild to medium) and its smaller then you think from the photos. Id call this a beginners toy, partly because of the size and partly because its mild in vibration. Don’t get scared and freaked out its not like a traffic cone you’ll be puttin up ya cooche regardless of how scary the photo its, its actually quite cute and easily usable and i did put it though its paces. i cant help it .. im like a goat!