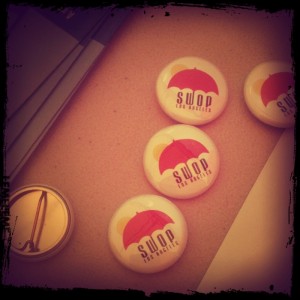 Slut walk was by all accounts, a success. Could it have been more successful, yes but cant things like this always be? I went to work the SWOP-LA table and help spread the word about sex worker issues. Being as the point of Slut Walk is to bring attention to and stop victim blaming and slut shamming they would be by all accounts a receptive audience. Sex workers are often the targets of slut shaming and are often maligned as well as often being targets of violence and sexual assault. Why? Because people forget were human and think because in many cases the sex work we do is illegal we wont go the authorities to report crimes against us and if we do.. were often not taken seriously. Yes, this still happens and yes this is the 21st century not the dark ages were living it. But i digress. I was happy to speak to as many people as i could about SWOP-LA and what they/we are working towards, about sex worker rights and also to help promote the next SWOP-LA event. Yes, i was fund raising too at Slut Walk and SWOP-LA did rake in a few bucks which should help offset some costs. I personally wet out of pocket on  flyers and so did a few others. I was working the SWOP-LA table along side Jessie Nicole SWOPs director and Serene Sin a BDSM educator and professional Domina. Other SWOP members and supporters showed up notably Mistress Justine Cross. I met Mistress Sativa, Porn Star Jessica Drake, and lots and lots of really nice interested and motivated young people. I even had a nice chat with the lady from NOW who hopefully will table at the next SWOP event. That’s a big deal as NOW hasn’t always been the most receptive to sex workers in general. All in in all it went well and us ladies of SWOP-LA rocked it. You should have been there.