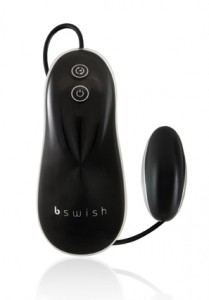 There’s nothing I like better then sex toys in my mail. Okay there’s a few things, like big fat stacks of cash, rainbows and sparkly ponies, but those doesn’t invoke the giddy response of “ohhhh Prezzies” like random free stuff does.  I was contacted by the folks at Eden Fantasys, they liked the honesty of my blog (i love it when people like me) and wanted me to do a little write up on one of their products. Gotta love folks who want you to speak the truth. I figured why not. I like writing and i like sex toys so it was tailor made for little ole me.

As i do with any of the product reviews I’ve written up i had this item sent over to Lou… My best friends furry tabby cat. I’ve written about Lou before and his relationship with the UPS/USPS/FEDEX people and since I’m lazy about the P.O. Box thing i like to have saucy mail sent over to his house because it makes me laugh. When the The Bnaughty Deluxe bullet vibrator arrived, I was really rather impressed by the packaging. Yes, i know I’m a design nerd. My background as an art director demands I pay attention to such things. Quality matte paper with spot color and varnish, they put some cash into it. When I took the bullet vibe out of the box it too had a sleek modern design. Looking good to the eye is a good first step I mean who wants to in the throws of passion whup out something that looks like it was conceived and made in some junk yard. Black and silver with an almost ergonomic shape to it. The cord from the actual bullet vibratie part to the controller could be a little longer but that’s really not much to complain about. This thing has several speeds. 1,2,3 are what you would expect  escalating constant speeds like most vibrators. Its when you get up to 4,5,6,7 that the fun begins. Low thudding vibration is first up on the menu, then some patterns of alternating pulsing and vibration in various combinations. Yeah that’s different and rather fun, my lady parts would have done a jig provided they had the ability to.

This little but powerful sex toy is best enjoyed with a partner cuz really when your alone you just need to get the job done and all those bells and whistles are not necessary. With a partner though, this could be a real sweet little addition to your toy chest. Looks good, fairly quit so you dont have to compete with the toys volume when you get vocal, with lots of speed, pulse and rhythm variation. Just talking about it makes me wanna bust the sucker out and go to town on myself…