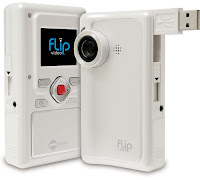 I bought a Flip©. So far i’ve filmed and edited one mini move. Don’t get too excited its just of my my dog barking and running around my house (yeah i know how to give the masses what they want). I wanted to practice with my editing software and see what the quality of this little plug an play camcorder was all about and made a 30 second clip with cross fades, two titles and a swiped soundtrack. It;s not bad and its certainly fun and easy, i give it a thumps up and i plan on documenting some of my photo shoots coming up and seeing what else i can do with my new toy.

I’ll take the Flip© to Pride next weekend, film the drag queens and the estimated 8,000 people celebrating gay pride and the fact that they can now get legally married. Usually pride has about 4,000 people this year its going to be off the hook.

so if you see me… don’t forget to smile!